The Wildebeest Migration, is one of the “Seven New Wonders of the World” and also known as The World Cup of Wildlife. If there is a safari you should go on, this has it be it. The Maasai Mara and the Serengeti National Park together form what no other reserve in Africa can! It is incredible, it ismagic, it is indescribable and it is WOW! 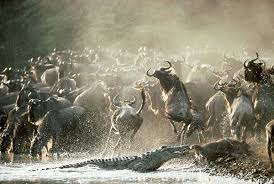 No where in the world is there a movement of animals as immense as the wildebeest migration, over two million animals migrate from the Serengeti National Park in Tanzania to the greener pastures of the Maasai Mara National Reserve in Kenya during July through to October.

In the Maasai Mara they will be hunted, stalked, and run down by the larger carnivores. The Maasai Mara also has one of the largest densities of lion in the world and is no wonder this is the home of the BBC wildlife channels Big Cat Diary.

The Kwita Izina is a traditional naming ceremony where the community members suggest names for a new born infant; this practice has been adopted for naming gorillas

. The park rangers, researchers and those charged with the safekeeping of these unique animals suggest names for all young gorillas born in the past year, generally based on observed behavior and characteristics. For more than three decades the ceremony has been performed for Rwanda’s newly born mountain gorillas; it became a public ceremony in 2005 and was officially named Kwita Izina in 2007. The event is seen as a celebration of Rwanda’s conservation efforts in protecting the endangered mountain gorilla. The naming is accompanied by traditional music and dance and the event helps to raise funds for conservation.

The event Features  unique performances and cultural traditions of 14 ethnic communities which live in Marsabit County: El Molo, Rendille, Samburu, Turkana, Dassanatch, Gabra, Borana, Konso, Sakuye, Garee, Waata, Burji and Somali. The presentation of the customs and living conditions of the fourteen tribes, their spectacular traditional costumes, arts and crafts, dances and music is a unique and fascinating experience – in particular in light of the stunning geographical characteristics and the limited general knowledge about the Lake Turkana and Marsabit County.

At first glance, this sounds like a light culture entertainment programme but the three days event will serve a deeper purpose in the region. The Marsabit-Lake Turkana Cultural Festival gives all the communities in Marsabit County an opportunity for the cross-cultural interaction, harmony, cohesion, integration, cooperation and trading. The underlying main goal, therefore, has been and continues to be, promotion of peace and reconciliation.

The idea for the original Safari Rally was born in a legendary, much-quoted conversation between Eric Cecil and his cousin Neil Vincent. A true motorsport devotee, Vincent refused to compete at the newly-built Langa Langa circuit. ‘I can imagine nothing more boring than driving round and round the same piece of track,” he declared. “But if you will organise an event where we get into our cars, slam the door, go halfway across Africa and back and the first car home is a winner, I’ll be in it.’

Together with Ian Craigie, the Competitions Secretary, Cecil encouraged the Competitions Committee to organise a long distance rally. Their moment came with the death of King George VI and the coronation of the new Queen, Elizabeth II in June 1953. A proposal to organise a rally through East Africa to pay tribute to the new Queen was accepted by the Management Committee and the ‘Coronation Rally’, starting from Nairobi around Lake Victoria through Uganda and Tanganyika and returning back into Kenya was established.

The East African Safari Rally continued every year thereafter, with great interest from international rally federations. In 1957, the FIA marked the East African Rally on its international motor sport calendar and there was genuine surprise amongst the REAAA. The date of the event also moved forward from the end of May to the Easter weekend, so as not to interfere with other European events.

When independence was gained by the three African countries – Kenya, Uganda and Tanzania – in the early 1960s, the historic rally route was changed. It would still pass through Uganda, Tanzania and Kenya, however organisers were to rotate the start and finish of the rally, to include Kampala and Dar es Salaam.

This festival is a blend of Film, music and culture Film- Each year, some of the most captivating and cutting-edge cinema from Africa and beyond is screened in venues across the island. From world-premiers to local shorts, Films are submitted based on a yearly theme and entered into various categories and competitions. The final night is an awards night, where the winning films are recognised and celebrated.

performance across several venues means that carnival fever hits Zanzibar for 2 weeks! They bring musicians together from all over Africa, as well as recognised international acts. Community; A Zanzibar institution, ZIFF is a truly local festival, with exhibitions, workshops, and cultural tours that take you to the heart of the community. It promote s local talent in film and music, showcasing new and old creative achievements. As ZIFF comes to town, so too do opportunities for recognising arts and crafts – the festival is always a hotbed of activity

We thank all of you for your continued support, for your business, likes, shares, referrals, prayers etc we appreciate you.
It's rare when we get special offers from exclusive places don't let this expire before you enjoy it.
#BreakingNews #TravelNews
Congratulations to @mahalimzurisafaricamp
How we welcome or bade good bye to our clients on safari... We share a moment on the slopes of ngong hills, under the guidance of the many women earning their livelihood through @sematsammy we learn how to make a #Maasai #bracelet . First you taken through on the various available colours and what they signify according to the #maasaiculture they you select your choice and wide down talking and creating your own , which will be your take-away...
Treat your family to the ultimate safari experience by booking the Twende Safari Family Offer  with up to 2 children sharing staying absolutely free of charge.